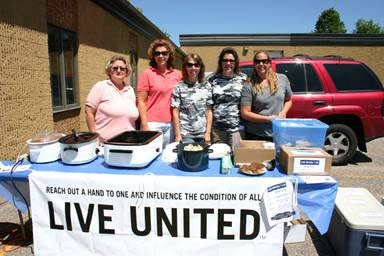 Bank-A-Count Corporation held a brat fry to benefit United Way of Inner Wisconsin. Special thanks should be given to Pete's Market for the generous donation of brats and to the Rudolph One Stop for their donation of soda & water. The brat fry raised a total of $344.00 for the United Way and was the first of several fund raising events planned for our campaign.

Tuesday, August 11th, 2009, the employees of Bank-A-Count held a United Way pie/ice cream and dessert social. Employees met at the end of the day to enjoy conversation and desserts while raising money for the United Way. Thank you to all who donated the delicious desserts and all who came to support the event. The employees designated the proceeds from this event to benefit the Wheels of Independence and the Family Center. The next event will be a community wide pancake breakfast to be held in September.

On Wednesday, September 23rd, Bank-A-Count Corporation employees held a pancake breakfast at the Rudolph American Legion Hall. The breakfast served approximately 65 people and raised $200.00 for the United Way of Inner Wisconsin. Bank-A-Count employees designated the proceeds from this event to benefit the Rudolph Seniors, Association for Handicapped Citizens, Big Brothers/Big Sisters Organization, and Samoset Council of the Boy/Cub Scouts.